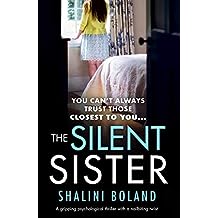 My first Shalani Boland read made me an instant fan and subsequent reads only reinforced that. I love her fast-paced, hold-your-breath style and ability to suck me into her stories quickly and keep hold.

I’m a little torn with THE SILENT SISTER. Was it good? Oh yes! Did it keep me reading? Yes, again! Did it have all the elements of a great psychological thriller? Absolutely!

So why the low-ish rating? I just didn’t feel that the quality was on par with other books I’ve read from this author.

We start out fairly one-dimensional, meaning that the entire focus of the story is the letter that mysteriously shows up in the protagonist’s home. I felt that any other aspects of the characters’ lives, while present, were so brushed over that they just didn’t have enough of an impact to properly flesh the story out. Hand in hand with that, when we did veer away from the letter, it felt forced back into the story with on and off, unnatural references to it.

I don’t mind staying with the main problem of the story from page 1. In fact, I prefer that over unnecessary build up. I’d much rather have other elements of the characters’ lives sprinkled among a suspenseful story. In this particular case, though, there just wasn’t enough happening to warrant it.

In my opinion, the book overall felt like an early-ish draft rather than a finished book, and I say this because this is exactly how my books feel before those last rounds of editing. I have to wonder if Ms. Boland isn’t receiving the level of editing she once did. If this was one of her earlier novels, I’d assume that her skills weren’t fully developed yet, but it’s pretty recent and on the heels of other very well done works, which leads me to believe it’s not so much the author, but the editor(s). Unfortunately, this happens quite often, especially if an author is bringing in the sales.

The story itself was gripping and I found Lizzy, the protagonist, easy to connect with. There were more than a few potential suspects – a sign of great story set-up – and the few I alternately honed in on as potential culprits turned out to be innocent. Always a good thing to be caught by surprise, however….

A surprise ending was definitely present, but while I LOVED the twist in the epilogue, the ending chapters preceding that left me a little frustrated. I felt that for the culprit to be realistic, a little more needed to be included early in the story to make it all feel plausible when revealed. (I know that’s really vague, but I don’t want to give anything away!)

Still, I found THE SILENT SISTER very much worth the read. I’d give the story 5 stars, but the editing 1 or 2. For Goodreads’ purposes, I’m rounding up because I just can’t bear to give this author less than 4 stars, especially when I suspect editing to be the problem.