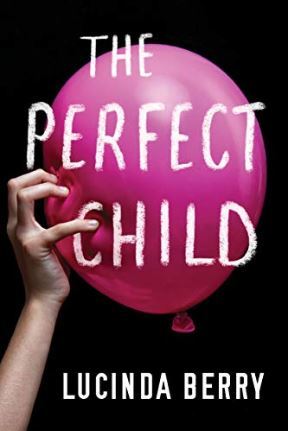 What a gem this turned out to be!

Chillingly suspenseful, but also endearing at times, this little book robbed me of much needed sleep. If I wasn’t staying up too late to read, I was tossing and turning with the plot on repeat in my head.

Janie – Is she the sweet, tortured child she seems to be or the devil incarnate?

Christopher – This dude is a major pushover, especially for little Janie. The trouble is, he can’t see what’s right under his nose.

Hannah – Poor, poor Hannah can’t seem to catch a break from Janie or Chris. It’s not long before I couldn’t help wondering, is this really as bad as it seems or is Hannah losing her ever loving mind? You’ll have to read it yourself to find out!

The author’s background in child psychology was hugely beneficial to the storyline and I don’t doubt for a second that as far fetched as Janie’s character seems to be, it’s entirely plausible. Ms. Berry does a spectacular job of not only shaping the character, but of getting to the bones of Janie so that love her or hate her, we understand her. Berry’s skill in character development seamlessly painted a three dimensional picture of Hannah and Chris, as well.

I loved every moment of this book, but have to admit that I was disappointed in the ending. It’s not because it wasn’t happy, but because I felt no resolution. Like there should be more to it. I can’t figure out exactly what would’ve made it feel more resolved for me, though. It’s not a story that can have a neatly tied up ending. Actually, as I’m thinking about it now, maybe it’s Hannah’s character growth. The arc is clear, but I think that if she displayed more strength in the end and took drastic measures to control the situation (even something over the top wacko, which it would most certainly need to be), I would’ve felt a stronger sense of closure. Maybe. It’s so hard to say.

Regardless, I highly recommend this hugely suspenseful tale of a couple’s desperation for a child, and how their dream come true can backfire. Horribly. Really, really, horribly.