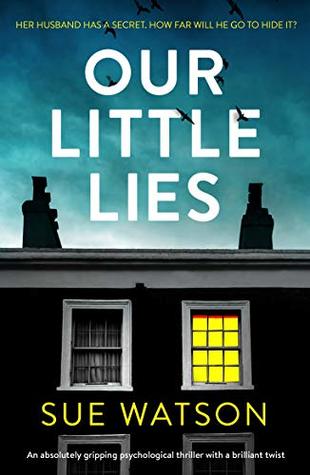 Nobody is perfect, especially not Marianne’s husband, Simon, the surgical whiz and object of every woman’s desires. On the outside, Marianne has it all – a beautiful home, 3 wonderful children, Simon’s love and adoration. Behind closed doors, well, let’s just say that nothing is what it seems.

OUR LITTLE LIES is heartbreaking story of emotional abuse, deception, and the people caught up in the games of one man’s ego trip. I found myself able to connect to the characters, buy into the premise of the plot, and turning the pages in hopes that this horrible man would get what he deserves.

While I enjoyed the read, a few issues kept me from fully falling captive to the story.

For the first half of the book I was frustrated by repetition, the incredibly weak nature of the protagonist (not to mention her blindness) and the slow-ish pacing of events. I felt that more time was spent declaring Simon’s greatness than moving the story forward. As it turns out, this is for good reason as it plays into the protagonist’s mental state, however a better view of that early on would’ve saved the frustration.

It’s obvious from the start that Simon isn’t who he seems. That in itself isn’t a problem, but I had a hard time understanding what all these other women see in him. I think that maybe if Simon’s mistreatment of Marianne had been held off until a little later in the book and we could’ve spent more time seeing how wonderful he was to her early in their relationship, I could’ve developed that image of awesomeness that had every woman and their mother swooning. I would have liked to believe for a bit that just maybe Simon wasn’t the problem.

The pace really picked up after the 50% mark and Marianne blossomed from weak and helpless to a picture of strength, determination, and vengeance. I found myself cheering for her and hoping that her efforts would expose the true Simon. I could drum up sympathy for Marianne instead of screaming at her in my head, but even more for her step-daughter, Sophie. I felt for that poor girl from the start and loved that Marianne cared just as much for Sophie as she did her biological sons.

I was certain I had the final twist figured out, but Ms. Watson proved me way off base! I love it when that happens, but I had a difficult time believing this one. Not because it seems impossible, but because the prior pages seemed to be lacking the kind of foreshadowing needed to make it all ring true. A few more hints throughout could have created a dynamic punch.

I may have been able to make sense of it and accept it, but the story fell apart after that, slipping into a long expose from the culprit in a delivery that didn’t match the character. The who, what, when, where, why, and how came out, but felt like an info dump to get the story over with.

Overall, I did enjoy the read, but felt like too many issues took away the wow factor.